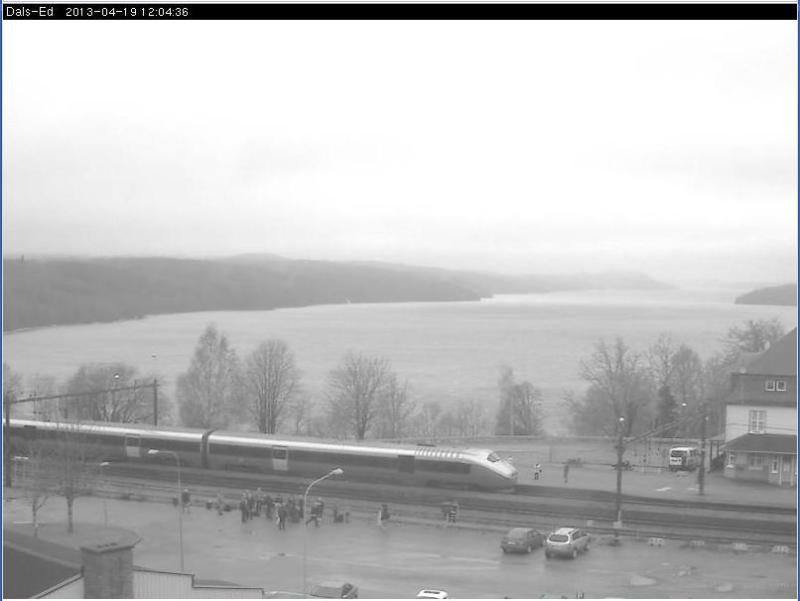 Previous Next
← previous day next day →

Posted by ursulakatariina (Turku, Finland) on 20 April 2013 in Documentary & Street.

...but I am in it.
Yesterday morning I hopped in the train you see here. I was going to go and do some serious shopping in Gothenburg, but little did I know what was going to happen... The journey started a little late, only about ten minutes later than it should have started and on the way I saw some amazing birds and few deer but then... The train stopped in the middle of nowhere without any obvious reason.
Soon first message came: 'We need to stop for a while'
Little later: 'There seems to be some problem on the track not so far from here'
After few moments: 'The electricity is cut from the track due to an accident. We are waiting for information how long it will take to repair the damage'
A short while after that: 'We just heard it will take at least six hours to do the needed repairs. A tree has fallen onto the electrical wires and cut the power. We are waiting for instructions.'
A little later: 'We are sorry to inform, we have to go to back to the last station we were, it's in a nice town called Ed. From there you all will get in buses and travel to Gothenburg in buses.
So, the train backed up all the way back to Ed and then the wait started. I was cold and hungry and my shopping mood had been destroyed so after an hour of waiting I decided to go back home. By the time I got home, I would have been shopping for almost two hours if the tree had not cut the power from the train track.
I still have no new clothes.
This picture is a screen capture taken by The Artist, don't know who has installed the camera that shows the scenes from Ed's station, but it can be found from here: http://webcam.dalsed.se/
The Artist did not know I was in the picture before I told him I can see myself there... :)

Nice to see you! I hope you enjoy seeing what I saw earlier.
Please, leave a comment so I know you have been here.

I got a colour spotlight, see it here.

Bad luck, but saved the money! We have here all the time trains late or do not come at all!;-))Haleja.

Happy weekend for both of you!

@Oiva: But saving money at this point leads to situation where I no longer have clothes to wear - in this town there is no clothing stores where I could find something useful at a reasonable price... :)

Your day was not exactly brilliant.

Better to stop then hit the tree thanks for the story.

Phew!! What a day it had turned out to be!!!! Anyway, Thank Heavens for mall mercies...the tree did not wait to fall on your train!!!

A perfect mood shot for your disappointing day!

The Mouse from Glasgow, United Kingdom

You'll have more money the next time, great photo for the story.

Doubletime shopping next weekend then!

@CElliottUK: Next weekend we have a spring fair here in Ed, so I'm not going anywhere...